Posted on September 27, 2020 by Claire Jones Posted in Festival News — No Comments ↓

Reminding you that Monday, Sept 28, is the last day you can register for and view the first three Zimfest Online recordings. Tuesday Sept 29 is the beginning of the three-week viewing period for the next four Zimfest Online sessions, ending October 19.

The first two are presentations, and registrants this month have let us know they have appreciated being able to view and the study the material at their leisure. The final two, Tanga Pasi and Zi’s Mvenge Mvenge dance party, are concert sessions – enjoy dancing with Zi and Helen!

Check out complete descriptions of all the sessions along with presenter biographies on the Zimfest Online page. Once you register for a recording (donation requested), you will be able to view it at any time you wish during the three-week period it is available.

Posted on September 7, 2020 by Claire Jones Posted in Festival News — No Comments ↓

Our first series of live Zimfest Online educational and performance sessions has concluded. For those of you who missed one or more, we are providing on-demand access to the video recordings on a donation basis. There will be 3 viewing periods with a different set of videos available during each three-week period. Registration is open now for the first three videos available to view from September 8 – 28:

Check out complete descriptions of all the sessions along with presenter biographies on the Zimfest Online page. Once you register for a recording, you will be able to view it at any time you wish during the three-week period it is available.

Posted on September 3, 2020 by Claire Jones Posted in Festival News — No Comments ↓

We are pleased to call your attention to Taffie Matiure’s GoodVibes Concert, a fundraiser to establish a mbira school for children in the Ruwa Community in Zimbabwe. The live broadcast will be held on September 5, 2020 on Taffie’s Youtube page starting at 12pm PT/ 3pm EST/ 20 CAT. The event is co-sponsored by Zimbuya.com, and during the broadcast a link to their website donations page will be shared. 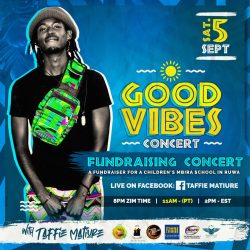 Posted on August 19, 2020 by Claire Jones Posted in Festival News — No Comments ↓

Please be aware that if you sign up for a session and cannot attend, you can be given access to view the recording. Write to online{at}zimfest{dot}org for assistance.

May, June, July Board Meeting Minutes

Minutes from the May 17th, June 14th, and July 12th meetings of the Zimfest Association board of directors have been posted.

Posted In: Zimfest Association News
Tagged With: Board of Directors, meeting minutes
No Comments

Posted on August 8, 2020 by Claire Jones Posted in Festival News — No Comments ↓

Our Zimfest weekend concert sessions with Sinini and Pamela Ngwenya (July 31), and Zivanai Masango and Helen Masvikeni (August 1) were wonderful, and Dr. Jennifer Kyker continues her teaching of Musekiwa’s mbira version of “Kari Mugomba” with a singing lesson August 9 (today, at 5 PM!). We have registration ready with three more original Zimfest Online presentations for this month. They will take place on Saturday afternoons at 5 PM PDT.

Register now, we hope to see you online! In September we will advertise opportunities to view the recordings of our most popular Zimfest Online presentations on a donation basis.

This year, as the Festival has transitioned to an online-only format, the value of digital media to our community has become more evident than ever. Zimfest has a large catalog of existing media, which we would love to make available to our community with proper curation. Additionally, we need to improve our processes for handing these media into the future.

To this end the Board and Zimfest Tech Committee are putting out a call for interested volunteers who can help us lead in this area.

Helping here is a terrific way to put your skills and interests to use for a great cause. We also welcome volunteers who may wish to shadow a lead Media Coordinator! On top of the incredible music, this an opportunity to learn more about digital rights and music licensing, so that artists receive credit for their creations.

Posted In: Festival News
Tagged With: volunteering
No Comments — Comments Are Open Post Your Reply

Posted on July 29, 2020 by Claire Jones Posted in Festival News

Zimfest weekend is almost upon us! To make up for the COVID-19 cancellation of the physical festival, we have scheduled online activities throughout the weekend. Please join us by registering (donate whatever you can afford!) through Zimfest Online for:

We have a few more Zimfest Online presentations to schedule during the month of August, and there has been a request to change the time for these presentations from 1 PM to 5 PM PST. Please let us know in the comments section below whether or not that would work for you.

We had a great Conversation/Interview with Lucky Moyo last Saturday! The recording is available for free on the Zimfest YouTube channel as well as the Overview page. Those who wish to donate can do so on Lucky’s (UK) Facebook page.  Alternatively, to support organizations like Bana BeNgwana Trust, you can donate to Kutsinhira’s Zimbabwe Community Development Program.   ZCDP supports community development, health and educational efforts in Zimbabwe like BeNgwana Trust’s building and borehole projects.

Thank you for your support of Zimbabwean artists and development projects!

Posted on July 19, 2020 by Claire Jones Posted in Festival News

If the fast-approaching dates of July 30 – August 2 sound familiar, it is because that is the weekend when Zimfest 2020 (Live) was to have taken place! We are responding to the hunger for real music (and not just talking about music) by scheduling three virtual concert and mbira events, described in full on the Zimfest Online page. Registration is now open for these sessions.

Don’t forget the Free Zoom interview/conversation between Claire Jones and long-time Zimfest teacher and advisor Lucky Moyo July 25 at 1 p.m. PDT (9 p.m.UK time). Lucky will talk about how he came to cultural activism and his ongoing project Bana BeNgwana Development Trust. More details can be found on Facebook. The event will be on Zoom, and a link will be posted here and on Facebook two hours before the event.

Joining with mbira students and enthusiasts around the world, Zimfest deeply mourns the loss of Sekuru Cosmas Magaya, who was laid to rest at Magaya village in Mhondoro, Zimbabwe, on the 13th of July 2020.  He was one of the last of the revered senior generation of gwenyambiras, loved by all who knew him, and an important teacher to many of us in the Zimfest community.  His mbira playing was both powerful and profoundly rooted in his spiritual traditions.

Sekuru Magaya played an integral role in the research of ethnomusicologist Paul Berliner’s award-winning book The Soul of Mbira (1978), through which he first became known worldwide. After that book’s publication, he taught and performed countless times internationally in Europe and the US. His long-anticipated book collaborations with Paul Berliner, The Art of Mbira: Musical Inheritance and Legacy (2020)  and Mbira’s Restless Dance are being published this year by the University of Chicago Press, to enthusiastic acclaim.

Sekuru Magaya participated in 11 Zimbabwean Music Festivals beginning in 1998, as a teacher, performer, and respected elder who led opening ceremonies and served as a shining example for Zimbabweans new to U.S. touring.  He was a true and open-hearted cultural ambassador.

To support Sekuru Magaya’s family during this time, Kutsinhira Cultural Arts Center in Eugene, Oregon, has established a memorial fund in his name. To learn more and donate to this fund, please follow this link.

Posted on July 9, 2020 by Claire Jones Posted in Festival News

Posted on June 23, 2020 by Claire Jones Posted in Festival News