Posted on April 14, 2021 by Claire Jones Posted in Festival News

This weekend, Zimbabwe celebrates 41 years of independence! We are excited to be participating in the first-ever online Zimbabwe Independence Festival. There is a great lineup of performers (including us!) from both Zimbabwe and the US. But that’s not all! The Festival will also feature discussions, networking opportunities, workshops, a film screening, and a tribute concert to those fallen musical heroes we’ve lost.
Save the dates: April 16-17-18! Check out the schedule at kutandara.org and be ready to share this special time with our Zimbabwean family.
#ZIF2021
#onlinelivesessions
#ZimIndependence
#41years
#marimba
#mbira 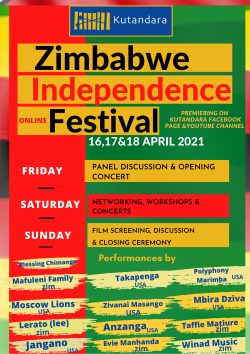