Posted on January 22, 2023 by Claire Jones Posted in Festival News — No Comments ↓

Mbuya Stella Chiweshe, renowned Zimbabwean musician and pioneering female gwenyambira, passed away at her home in Kuwadzana on 20 January. Born Stella Rambisai Nekati Chiweshe on July 8, 1946 in Mujumi Village, Mhondoro, Mbuya Stella Chiweshe was undoubtedly Zimbabwe’s Queen of Mbira and one of the country’s foremost cultural ambassadors. Married to German national Peter Reich, Mbuya Stella had returned to Zimbabwe telling relatives that her days were coming to a close and she needed to settle back home (more info is available here).

North America students of mbira may be familiar with Chiweshe’s many pre-independence mbira singles, the first of which, “Kasahwa,” went gold in its initial 1974 release. For four years following independence, she was the featured mbira player in the Zimbabwe National Dance Company. In 1986 she formed the Earthquake, a mixed band which included three Zimbabwean-style marimbas and hosho played by her daughter Virginia Mukwesha. Mbuya Chiweshe recorded several albums, performed numerous times in Europe and the WOMAD festival and took at least two tours to the US, participating in Zimfest 2007.

I met Mbuya Chiweshe during my first visit to Zimbabwe in 1980-81; she performed on mbira in a 1st Anniversary of Independence show, opening for Dumi Na Maraire Marimba (an ensemble featuring all Zimbabweans plus myself). Following my return to Zimbabwe in 1985 I discovered that Mbuya Stella and Virginia were living a short distance away from my place in the Avenues area of Harare. I became a frequent visitor and thus was around and able to lend a helping hand when she formed the Earthquake – with some of the same marimba players from St. Peter’s Kubatana that I had gotten to know five years previously! It has always seemed like each time I have been in Zimbabwe, Mbuya Stella and her music was just around the corner. I know her spirit will endure, and her music continue to inspire in the many memorable recordings she made.

Steadfast in her musicality and strong spirituality, there was no one like Mbuya Stella. She will be sorely missed. My condolences to her daughter Virginia Mukwesha-Hetze and the entire Chiweshe family. Nematambudziko. 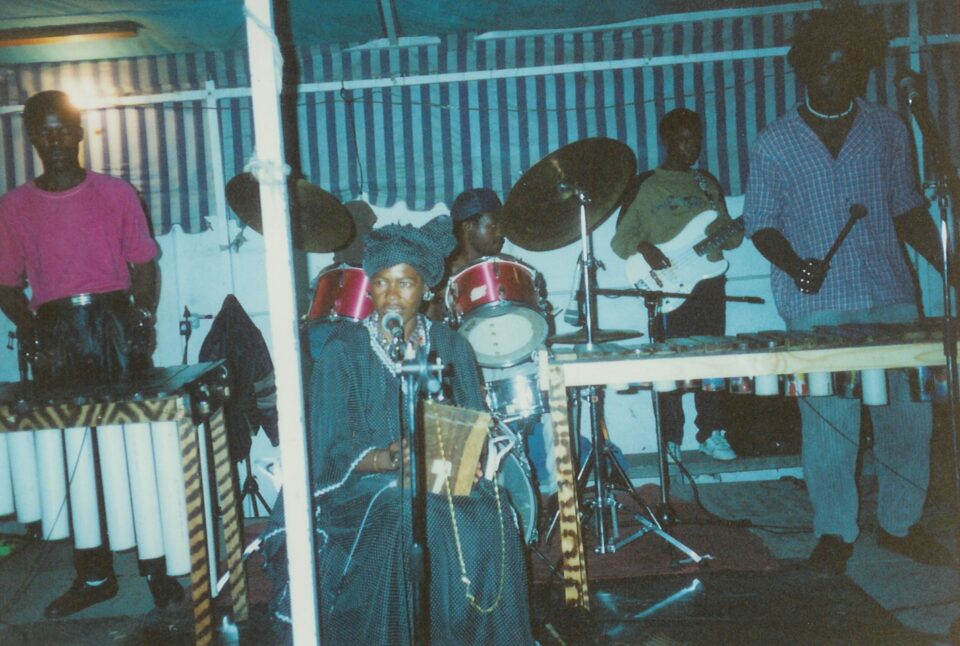 Stella Chiweshe and the Earthquake – Harare 1990