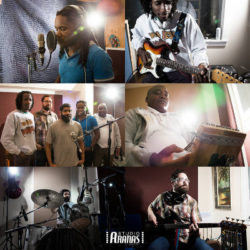 Based in Edmonton, Canada, Mbira Renaissance gives original flair to the rich, ancient, classical musical genre that is mbira. Maintaining the genre’s musical traditions, the group sings primarily in the Shona language of Zimbabwe. The music is delicate yet upbeat; the bass lines and reggae rifts are interwoven with jazzy melodies, and the polyrhythm of the traditional Zimbabwean mbira sets the delicate foundation for the pieces. The band has performed at many locations in Alberta, Canada, including the North Country Fair in Lesser Slave Lake and The Works International Visual Art and Design Festival. 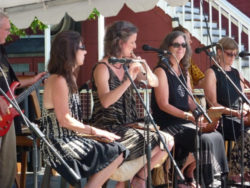 Sarungano is a four-piece vocal and mbira ensemble that performs traditional and contemporary songs from Zimbabwe. Inspired and informed by a respected list of Zimbabwean musicians, Sarungano brings to the fore a rich tapestry of call and response combining circular melodic lines from the mbira with rich vocal harmonies in the Shona language. Sarungano members are Dana Moffett, Dyanne Harshman, Leslie Breeden and Donita Crosby. Sarungano was born out of the Rubatano Center on Whidbey Island, Washington, and was inspired by the active Zimbabwean musical community in the Northwest and beyond. Sarungano keeps ongoing connections with its many teachers while it aims to share the stories of Zimbabwean culture through music and song. Their name, Sarungano, is the Shona word for “storyteller.” Sarungano’s many teachers include Paul Mataruse, Tendai Muparutsa, Jacob Mafuleni, Martha Thom, Musekiwa Chingodza, Mbira dzeMuninga, Piwai Magaya and Hope Masike, just to name a few.

The Sellwood Marimba Ensemble was started 16 years ago by Heidi Perry. A math teacher with a passion for marimba, Heidi started marimba at Sellwood Middle School. Over the years Sellwood has performed in the Portland, Oregon, community at such events as the Rose Festival, the Festival of Flowers and benefits for Portland Parks & Recreation and United Cerebral Palsy (as well as many others). The ensemble is now under the direction of Nathan Beck.

Mhondoro is a Eugene, Oregon-based marimba band that plays the buoyant and spirited music of Zimbabwe. The music, which inspires audiences to leap to their feet to dance, sing and clap, is played on wooden marimbas, drums and hosho (shakers) with singing and the occasional cowbell. Members of Mhondoro are Ken Blanchard, Charlene Talkington, Dennis Urso, Janis Weeks, Lynne Swift, Janese Olalde, Janine Etherington, Jose Olalde, Toni Timmers and Barb McWilliam. We are joined by Alex Weeks, Jake Roberts and Musekiwa Chingodza whenever possible. Mhondoro has played for the Eugene Celebration, the Bach Festival, Saturday Market, Oregon Country Fair, the Zimbabwean Music Festival and many other public and private celebrations including weddings, anniversaries and birthday parties. On request, we can teach a simple song for your guests to learn and play on the spot! 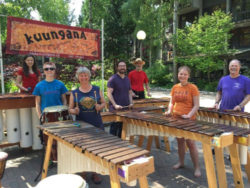 Kuungana is a Shona (and Swahili) word that means “connect” or “join.” We are a multi-generational band loving to share our unique collective arrangements of vibrant traditional, contemporary Zimbabwean and pan-African inspired music. With marimba, hosho, drums, vocals and occasionally mbira and other instruments, we create a fun and inspired sound that connects us to our audiences. We started in 2010 with three former members of the now retired Juba Marimba (Deb, John and Tedd), and three current and former members of The Big Bad Monkeys, a youth marimba band (Adrienne, Maya and Mo). We recently added Shea, a former Big Bad Monkey, and Aja Moon from Kuva Rhythm Project. Our performances are filled with energy and our music is upbeat, danceable and fun for all ages! After an amazing performance that followed an intense rainstorm at Zimfest 2015, several people said that we should have been playing the night stage!