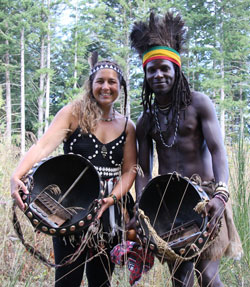 Mbira Spirit consists of Amy Matamba from Vancouver Island and Tafadzwa Matamba from Zimbabwe, with a powerful sound and vision of bridging communities between Canada and Zimbabwe. Together we are one. Playing African, folk, spiritual and gospel music, our performance is unforgettable. Enjoy our new release song “Ferry Me Home” (on YouTube) – a tribute to Vancouver Island (in B.C, Canada). It is being played on CBC, Zim Radio in Zimbabwe, and many stations on Vancouver Island.

Mbira Spirit believes that the power of music and the arts can change lives and we are taking action to make a positive change. All proceeds of our music and performance will go towards our twin Cultural Arts Centres on Vancouver Island, Canada, and Magunje, Zimbabwe. Our music, message and our presence are inspiring and bring hope to ALL who participate. “The music and song that you create as a loving couple is truly inspirational and SOUL LIFTING indeed! You are creating something unique and far reaching as no one else in these parts are making such wonderful, moving and magical moments with music,” says Skyy Vancouver Coop Radio. Videos of Mbira Spirit Live!: Say it and Mahororo. 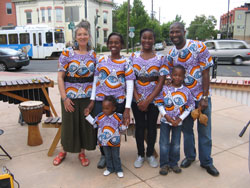 Sellwood Marimba Ensemble was started 16 years ago by Heidi Perry, a math teacher with a passion for marimba. Over the years Sellwood has performed in the Portland community at such events as the Rose Festival, the Festival of Flowers, and benefits for Portland Parks & Rec and United Cerebral Palsy, as well as many others. The ensemble is now under the direction of Nathan Beck.

Mateze Mana, or “four deze,” is an mbira group that started when two youngsters decided they would like to learn to play mbira. These youngsters joined Jim Loewenherz and Rosalie Brown-Lundh, learned to play, made their own dezes, joined workshops and camps to learn from other teachers and are now young adults. While Rosalie Brown-Lundh is still a music educator and Jim Loewenherz is still a luthier, Parker Ediger is now a senior at Tigard High School, an extraordinary saxophone player, and planning to pursue a career in music/music education; B’Elanna Rhodehamel is a freshman at the University of Alaska in Fairbanks, contemplating ethnomusicology while studying and pursuing a variety of interests including crevasse rescue, avalanche rescue training, and other outdoor activities.

Mhondoro is a new marimba ensemble formed in 2014, and is a performing ensemble of the Kutsinhira Cultural Arts Center. We play traditional and contemporary music from Zimbabwe on marimba, mbira, drum and hosho. Past performances include the opening of Eugene’s Saturday Market, benefits for various causes, community celebrations and private gatherings. Mhondoro members have performed in various ensembles over the past 20 years, have played at the Zimfest day stage for many years, and have arranged many of the pieces that we perform in addition to learning songs from Zimbabwean and American masters. We came together as a new group with a love to perform and share this wonderful music.

With members hailing from Japan, Zimbabwe and New Mexico, Jekesa Marimba represents a true fusion of cultures. The name “Jekesa” is chiShona for “light-bringer,” and was formed from the names of the three core members (Je from Jeff, ke from Kensuke and sa representing Mandla’s father’s name). Their repertoire ranges from contemporary chimurenga and pop covers to traditional mbira music and marimba classics, all with a unique flavor due to the members’ diverse styles and backgrounds.