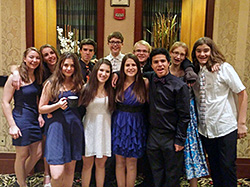 Shamwari Tamba is an evolving youth performance marimba ensemble consisting of high school students from the ages of 14-18. The teen performers in the group have all been playing and learning marimba for upwards of eight years. Many of the members have previously performed at Zimfest on both the evening and afternoon stages. Having been exposed to many different instructors from many different cultural backgrounds, Shamwari Tamba plays both traditional marimba as well as newer Western arrangements. 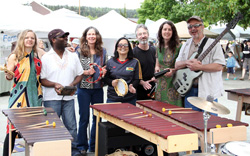 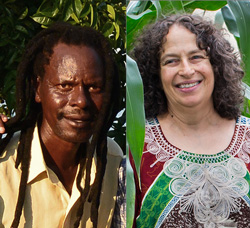 “Samaita” Vitalis Wilbert Botsa grew up in a Zimbabwean village family of singers and mbira players. An extremely accomplished mbira player, he creates complex waves of sound seemingly impossible from the two thumbs and one finger used to play mbira. Very traditional in his relationship to the “music of the ancestors,” Botsa has performed at important ceremonies throughout Zimbabwe, and is featured on 5 CDs. This is his first U.S. tour, sponsored by MBIRA (mbira.org). Learn more about Samaita and see his videos at http://www.mbira.org/samaitabotsa.html.

Erica Azim has played Shona mbira music since she was 16, and has performed around the world. She has performed with many of Zimbabwe’s greatest mbira players. Erica met Samaita in 2002, and has studied his unique style with him for the past several years. http://www.mbira.org/ericaazim.html. 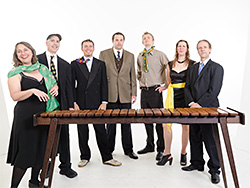 Boka Marimba is Portland’s original African-style marimba band. They have been thrilling audiences in the Pacific Northwest with the exuberant music of Zimbabwe and Southern Africa for more than 20 years. Boka’s blend of marimbas with drum set, percussion and vocals is upbeat, danceable, fun to watch, and appeals to listeners of all ages. The members of Boka Marimba have diverse musical credentials, including backgrounds in jazz, percussion, and voice, but they all share a love for Shona music. The sheer pleasure of playing is the glue that bonds the band together, and the desire to share this music with others is the fuel that fires Boka Marimba.